You are here: Home>Complete archive>Articles>1940s>Personnel>Gareth (Taffy) Davies
From: Up
Prev
Next 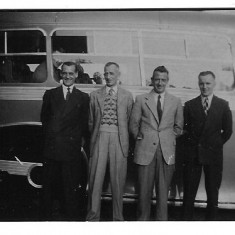 1950 on the right Gareth Davies with firemen on a outing. One of the other firemen is Bill Sowerbutts. If anybody out there recognises anyone in any of the attached pictures please let us no. 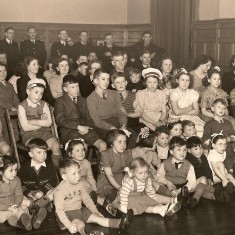 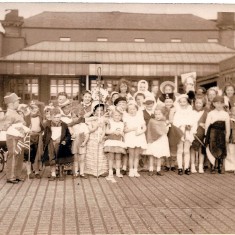 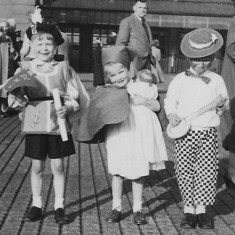 Gareth's two sons and daughter at the Coronation party 1953. 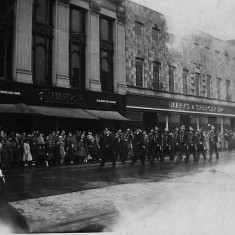 I would think it was probably the Mayors Parade.

Just to update on the life of Taff. After leaving Blackburn Fire Brigade he went to Hull for 2 years. He then became Transport Officer for Cornwall Fire Brigade and one of his first call outs was in connection with the Torrey Canyon disaster. He became Brigade Engineer in 1974 and retired in 1976. He then went to Saudi Arabia for 2 years where he was Transport Officer for the fire brigade at Dharhan International Airport. He returned to the Uk and retired to Mabe in Cornwall where he died in 1996, nine months after celebrating his golden wedding anniversary.

I started my career at Blackburn Fire Station in June 1964 and have a distant memory of the then Transport Officer of who I new as Taffy Davies. He started as mechanic in 1948 and worked his way up to Transport Officer until 1964 were he moved on to Hull City Fire Service. Gareth’s Son remembers the the four years that they lived on the Block in Canterbury St and 34 Sumner St with fond memories. Ironically when I got married in 1968 we moved into 38 Sumner St next door but one.

My dad, Gareth Davies joined Blackburn Fire Brigade in 1948. He was a mechanic and rose through the ranks to become transport officer before leaving to transfer to Hull Fire Brigade in 1964. In 1951 the family moved from Waterfall to live at 81 Canterbury Street and after a few months there we then moved to 34 Sumner St where we stayed until November 1954 when we left the fire station houses and moved to Preston New Rd.
I can remember many happy times playing as a small boy in the fire station yard and especially remember one very cold winter when the snow was so deep that we were able to build an igloo.
I can also remember attending the Christmas party held in the room above where the engines were kept , the annual bonfire held in the yard and in 1953 there was a fancy dress party held to celebrate the Queens Coronation