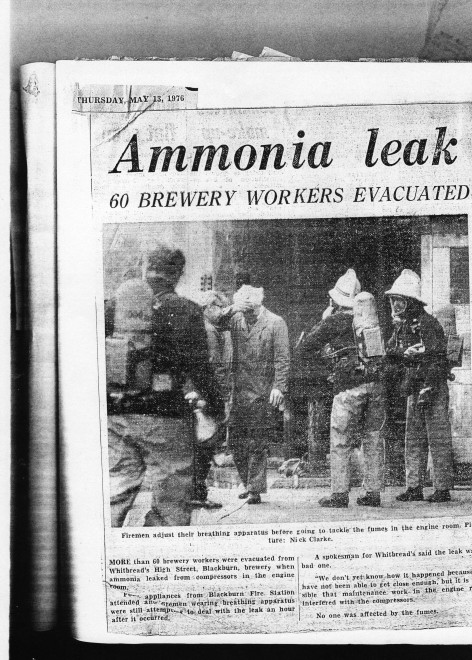 Article with picture showing fire brigade going into action. I recall this incident it happened in the early hours of the morning, Firefighters at Blackburn were familiar with this type of incident, some years earlier a similar incident occurred at the Fishmoor Water Filtration Plant on Roman Rd sadly with a more tragic outcome.

I was one of the first Breathing Apparatus teams to enter the plant room to try and locate the leak, in the early days Firefighters had very limited protection against chemicals only Chemical Splash suits which were carried on the Emergency Tenders. We entered wearing just our normal Fire Kit and Breathing Apparatus we located the leak from a pipe flange , it was then after  just a few minutes we experienced a burning sensation  from our most tender regions of our body (to put it politely). Apparently Ammonia attacks the tender perspiration parts of the body and by god it did that night.

We all rapidly withdrew from the room only to be told that we needed to Immerse the effected parts in water and yes in those days no decontamination  units. We were directed to the company’s wash room and yes you guessed it not a pretty site four firefighters trousers around their ankles splashing water on there private parts.(ooh what a relief )

After the so called decontamination we were told to tie the bottom of our over trousers up and yes you guessed it back in, the leak was isolated, I recall coming out and somebody said look up and through the yellow glow of the Sodium street lights you could see the gas cloud fortunately it was in the early hours of the morning and the gas cloud would disperse before the morning rush hour.

From that morning I developed a great respect for Ammonia.