You are here: Home>Complete archive>Articles>2010-2019>Personnel>Blackburn firefighter is 'superhero of the animal world'
From: Up
Prev
Next

Blackburn firefighter is 'superhero of the animal world' 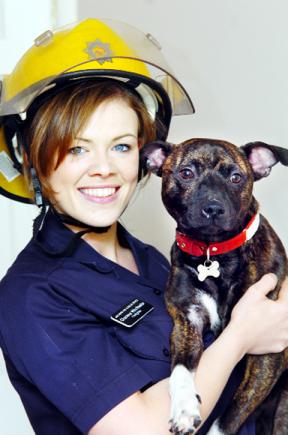 A FIREFIGHTER who has rescued two dogs in as many weeks has opened her home to one of the animals.

Blackburn firefighter Charlene Winchester rescued Staffordshire bull terrier Bobby from an old mill site, where the distressed animal had been trapped and without food for days.

Now she has given a home to the dog, which she has named Bobby, after no owners stepped forward to claim him.

It comes as the firefighter, who lives in Burnley, made a second rescue, a Rottweiler called Tess, from a home in Mill Hill. She was cowering inside a living room filled with thick smoke on Tuesday. Bobby was stuck in a gully on the Brookhouse Mill site in Blackburn when he was found by firefighters.

Charlene’s crew, from Blackburn, used ropes to drag him out of a steep ditch, filled with rubbish, where he was trapped down the side of the old mill, off Brookhouse Lane.

The one-year-old dog then captured the heart of his rescuer.

Charlene said: “Bobby lives with me now and is doing so well.

“I said as soon as we rescued him, that if he didn’t have a home, I would give him one.

“He’s a lovely dog with a great nature. I’m glad we’ve found each other.”

Crew manager Dave Hilliard said: “Charlene is getting a bit of a reputation for rescuing dogs, she’s like the animal world’s super hero.

“It was clear to see when she rescued Bobby that she had a soft spot for him.” On Tuesday, three-year-old Rottweiler Tess was moments from death in the thickest part of the smoke-filled living room of the home in Moorgate Street, Mill Hill, when no one else was home. Its owner Jess Roberts, 19, said: “There were flames and smoke everywhere and I knew Tess was in there but there was nothing I could do. The fire service were brilliant though and they got here really fast and went in to get her.”