You are here: Home>Features>The Removal To The New Station 1921

The Removal To The New Station 1921

A History Of Blackburn Fire Brigade 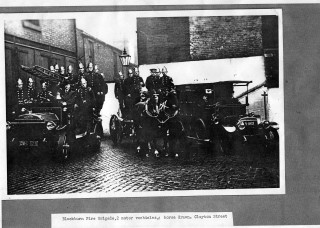 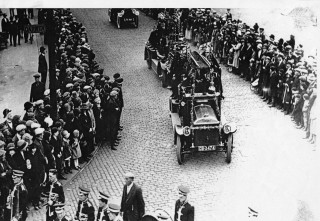 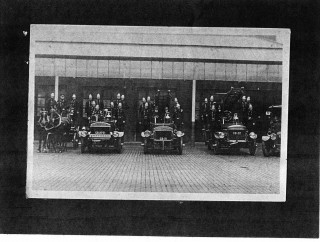 In the year 1913 Blackburn fire brigade received its’ two new motorised Fire engines , firstly the Samuel Crossley named after the Mayor and then the Isaac George Lewis named after the Chief Constable, both brand new modern fire appliances.

Housing the two new motor fire engines presented a bit of a problem, the station being designed for horse drawn appliances, but this was solved by the erection of a garage in Chapel Street, partly on land previously occupied by the condemned cottages. However, the Town Council had realised the inadequacies of the fire station and, at the same time as the decision was reached to order the two motor engines, it was also agreed to build a new central fire station on what was known as the “wrangling” site. The “wrangling” site was named on account of the wrangling or wrestling bouts which used to be staged there.

Competition was invited and eventually plans submitted by Architect Mr. Walter Stirrup were accepted for a central fire station in Byrom Street, including residencies for the first and second officers and 33 cottages for the men. Matters were pushed forward and in September 1914, the corporation applied to the local government board for sanction to borrow £31,600 for the scheme. The following month the tender by Messrs . Marshall and Dent was accepted for the building of the fire station and that of Messrs . Cronshaw Bros for the erection of the houses.

Good progress was made with the work when, owing to the first World war, the government stopped all public building. On  The restoration of peace permission was obtained for a resumption of work but , in the five years that had elapsed , there had been a considerable advance in the costs of wages and materials. Contracts  had to be revised and the final cost of the station was over £80,000.

The very handsome building fronting onto Byrom Street was constructed in a rather severe classical Greek style of architecture. The spacious six bay engine house , flanked on each side by the houses of the first and second officers , was beautifully finished with a ceiling of polished pinewood and a floor of an exceptionally hard biscuit coloured tile.

The watch room commanding a full view of the engine house contained the very latest switchboard equipment and several devices to facilitate a speedy turnout.

Over the engine house were the recreation and concert rooms . The concert room was used for socials , dances etc., being a really lovely room , oak panelled with a very handsome arched decorative ceiling, a kitchen on the same floor was fitted out for use on social occasions.

At the rear of the engine house , a glass verandah ran its’ entire length and was wide enough to provide cover for washing down the vehicles in inclement weather.

At right angles to the engine house on the Canterbury Street side stood the workshop, splendidly equipped with lathes , drills, forge and an overhead travelling crane and many other items essential for the maintenance of machines and equipment. Adjoining the workshop was an 85 foot  hose and drill tower, a stone balcony near the top to provide an unrivalled view of the town and its’ surroundings.

On the Sumner Street side was the three bay ambulance house, Stables for the horses and the harness room. The ambulances are no longer housed at the fire station and on this side of the building many changes have taken place and much reconstruction work carried out. Substantially however the whole building remains the same today as it was when it first opened. Ranked as one of the finest in the country when first opened , it is a credit to the Architect and the builders that, today it can still lay claim to the title and is envied by many fire authorities.

The firemens’ houses which, with the station itself form the four sides of  a square enclosing the large drill yard, blend perfectly with the main building.

The brigade moved from Clayton Street to the new headquarters on December 8th 1921, but the official opening by the deputy mayor , Alderman James Kay, J.P. did not take place until may 18th the following year.

The move from the old station to the new one was carried out with ceremony befitting the occasion. All the appliances and equipment had been given that extra touch of “spit and polish” and the men were at their smartest in their best uniforms.

The two motor engines with escapes were brought round from the garage in Chapel Street and at 11-45 a.m. , the procession of fire fighting appliances left Clayton Street for the last time , pride of place was given to the little steam engine with Inspector W.A.Jones in his rightful position as the new officer in charge of the brigade, Mr Simpson having retired some four months earlier after completing 27 years service in that capacity.

Following the steamer came the No.1 motor engine “Samuel Crossley”, the No.2 “I.G.Lewis and the No.3 “Lawrence Cotton” purchased in October 1920. Two motor ambulances and a horse drawn ambulance completing the line up of vehicles. A new Dennis Motor tender acquired only a few months before remained at Clayton Street with a full crew under Sgt. W.Atkinson to deal with any calls that might be received during the removal. In the officers position on the “Samuel Crossley” sat the Chief Constable , Mr. C.Hodson, The machine being driven by Sgt Head, the second officer of the brigade. In stately order the procession moved out of Clayton Street into Mincing Lane, through St Peter Street and down Darwen Street into Canterbury Street, entering the new station in Byrom Street at 12 noon and commencing a new era in the history of the Blackburn Fire Brigade.

It is worthy of note that , during the last three years at Clayton Street, the brigade sufferrred very heavy fire losses and that, in the first three years at the new station , the annual fire loss showed a striking decrease