You are here: Home>Complete archive>Articles>1980s>Incidents>Northwood Aged Persons Home Fire,Preston New Rd
From: Up
Prev
Next 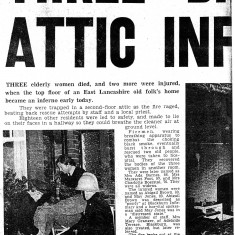 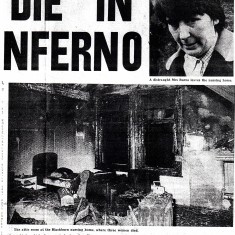 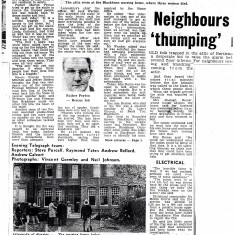 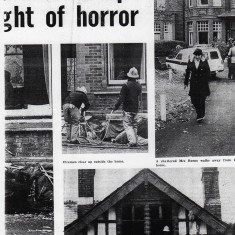 Even after all these years  I can still recall the  the horrific picture of that incident.

I was the driver of the  first Fire Engine, it had been a uneventful night we were on standby and getting some sleep, we were woken by the sound of a voice over the Stations PA System it was a member of the staff from Northwood APH reporting the fire to our control via the stations running call telephone which is situated in a box outside the fire station.

On discovering the fire they had tried to raise the alarm via the 999 System only to find they could not get a telephone signal, he then jumped in his car to try and find a Public Phone Box, the nearest being on Montague St about half a mile away from the home on arrival at the phone box he realised that he was within a short distance from the Fire Station so carried on to make the call by the running call system.

When we responded we were aware of the severity of the incident because we had heard the  telephone conversation to our Control. Two Fire Engines responded Station Officer Ernie Calvert in charge with a third being sent form Darwen. We followed the member of the staff who had made the call. On arrival it was obvious that a serious fire was developing at first floor level with several occupants reported trapped.

Firefighters wearing Breathing Apparatus were quickly deployed and fire fighting operations carried out. In the early moments of any severe fire the driver of any Fire Engine first on scene has to be, to coin a phrase, multi tasking, he is responsible for communication, pump operating, Pitching the 13.5 metre ladder to the first floor window breathing apparatus control and finding a water supply. I quickly realised the severity of what was going on when I received a radio message via the personal radio system from the officer in charge to make pumps 3 and three ambulances required! we were not at that time aware that the third pump had been mobilised on the first attendance by our control.

I  proceeded in to the premises to confirm to the OIC that I had  transmitted his message. I climbed to first floor landing level to be confronted by a sight that will never leave me. Lined up one next to the other were the rescued occupants of the room involved in fire. Firefighters were going from one to the other carrying out CPR in a desperate attempt to revive them until ambulance crews had arrived.

I cannot remember how many were rescued or how many fatalities the fire eventually claimed. All  I remember is the teamwork and professionalism of everybody involved that morning. One of the BA teams were Mike Smyth and Ian Stanworth.

Just a small mention of the commitment that morning I recall Mick Baines was finding the nearest fire hydrant and came running down the side of the Fire Engine just at the same time as I was pulling back the 45mm hose line, that had been over pulled towards the fire. I could not have timed it any better he tripped over the hose and did a complete half somersault and landed on his back believe me the ground shook, I inquired if he was ok ? His reply was yes, no more no less and carried on. Can you imagine the claims that would have been flying back and forward in to days modern Fire Service.

I recall some of the crew names Ernie Calvert, Dave Bowers, Gordon Mitchell, Geoff Holden Mick Baines and myself , if you were their please let us no.